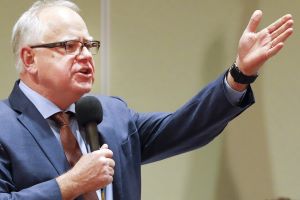 Judging by the absence of major bills sent to DFL Gov. Tim Walz this week, it’s hard to believe the politically divided Minnesota Legislature has an $8 billion spending agreement.

With about two days to finish their work, lawmakers had completed none of the big spending bills by Friday evening, when both the Senate and House adjourned for the day. Bipartisan committees were working through sticking points on everything from tax cuts to spending on public safety and health and human services.

Lawmakers announced the framework of a grand bargain Monday morning. They set midweek deadlines to finish the most complicated legislation, then blew past those deadlines.

Their only option now is round-the-clock sessions over the weekend to pass $4 billion in new spending and $4 billion in tax cuts before midnight Sunday. That money would come from the state’s record budget surplus and be spent over the next three years.

Publicly, both House Speaker Melissa Hortman, DFL-Brooklyn Park, and Senate Majority Leader Jeremy Miller, R-Winona, have tried to strike tones that are at once optimistic but resolute.

In separate statements to the media, each emphasized they remain committed to their grand bargain — but also to each party’s priorities, which often differ. Hortman on Friday said it’s essentially all or nothing; for example, even if there’s agreement on tax cuts, those won’t be passed if there’s no agreement on spending plans.

In one sense, there’s little risk if they can’t make it happen; the state currently is operating under a two-year, $52 billion budget approved last year, so there’s no risk of parts of the government shutting down if no additional legislation passes this year.

On the other hand, Walz and every seat in the Legislature will be on the ballot in November’s general election, and some lawmakers seeking re-election feel pressure to show voters they’ve accomplished something with what amounts to a state awash in excess tax revenues. The state has a projected budget surplus of $9.25 billion.

Taxes: Top lawmakers say agreement on $4 billion in tax reductions is close. It likely will focus on lowering the 5.35 percent tax rate for the lowest income bracket, with bigger credits for renters, seniors and low-income residents.

The tax bill has to originate in the House. Hortman on Friday said it’s leverage to get other things done and likely will be the last bill that chamber passes.

Health and human services: GOP lawmakers want to put most of the $1 billion in agreed upon spending towards raises for caregivers and long-term care workers. Industry advocates say dozens of nursing homes and care facilities will be forced to close without more state money.

Democrats also want to raise caregiver pay but hope to put some of the money into aid to help families pay for things like child care.

Education: Lawmakers are split over how much of the $1 billion in new spending should go towards reducing school districts’ special education costs versus other supports for students, such as mental health services. Senate Republicans also want to focus on improving student literacy.

Public safety: The House and Senate are struggling to agree on how to divide $450 million between preventing crime and fighting it. Republicans want to put most of the money into policing, while Democrats also want to fund community intervention efforts. Both sides agree more funding is needed for the state’s courts.

Infrastructure: There’s agreement to spend $1.5 billion on state infrastructure, but no specifics have been released. The deal on the so-called bonding bill would include $1.4 billion in borrowing and $150 million from the budget surplus. This is the one bill that could be approved even if everything else falls apart.

Other bills: Legislative leaders and Walz also want to spend about $1.3 billion on other supplemental budget items. Some less significant bills already have been agreed to by lawmakers, including $46 million in new spending on higher education, while others were still being debated.

Outside of spending bills, there are also policy updates making their way through both chambers, most notably changes to liquor laws to allow growlers and bottles to be sold by brewers and distillers.

Despite some smaller deals and a grand spending bargain, lawmakers will need a concerted push to get done by Sunday night. Walz has said he’s not interested in calling them back for an overtime session.